Typically, the simplest boiler operational adjustments rely on the reduction of excess oxygen used in combustion. The figure below illustrates how NOx levels typically vary with oxygen content: 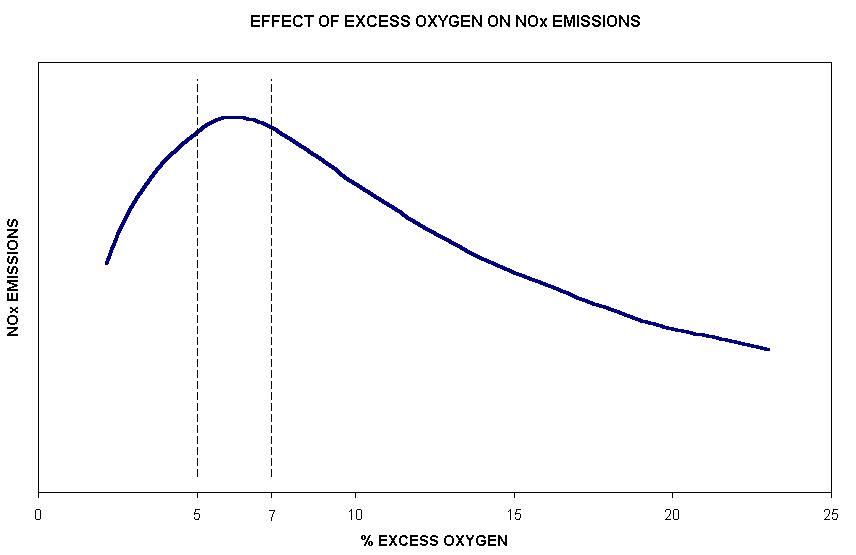 Boilers may be operated at higher than necessary excess air conditions for the following reasons:

The NOx creation rate typically peaks at excess oxygen levels of 5 – 7% where the combination of high combustion temperatures and the higher oxygen concentrations act together. At both lower and higher air/fuel ratios, NOx production falls off – due to lower flame temperature at high excess air levels and lower oxygen at low excess air levels. Low excess air is achieved by changes in operating procedures, system controls or both.
Boiler operation with LEA is considered an integral part of good combustion air management that maximizes boiler efficiency. Therefore, most boilers should be operated on LEA regardless of whether NOx reduction is an issue. However, excessive reduction in excess air can be accompanied by significant increases in CO. When excess air is reduced below a certain level, CO emissions increase exponentially. This rapid increase in CO is indicative of reduced mixing of fuel and air that results in a loss in combustion efficiency.
Load reduction, when implemented, decreases the combustion intensity, which, in turn, decreases the peak flame temperature and the amount of thermal NOx formed. However, test results have shown that with industrial boilers, there is only slight NOx reduction available from this technique as the NOx reduction effect of lowering the load is often tempered by the increase in excess air required at reduced load.
Higher excess air levels are often required with older single-burner units because high burner velocity promotes internal gas recirculation and stable combustion. Multiple-burner boilers generally provide a greater load turndown capability.

Staged combustion burners, the most common type of low NOx burners (LNB), achieve lower NOx emissions by staging the injection of either air or fuel in the near burner region. Staged combustion burners may be further classified as either staged air burners or staged fuel burners. The division of combustion air reduces the oxygen concentration in the primary burner combustion zone, lowering the amount of NOx formed and increasing the amount of NOx reducing agents. Secondary and tertiary air complete the combustion downstream of the primary zone, lowering the peak temperature and reducing thermal NOx formation. The basic concept of staged combustion is shown in the following diagram: 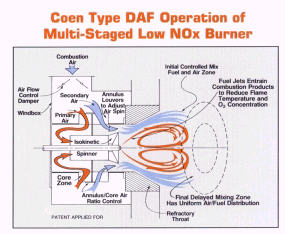 The deficiency of oxygen in the first zone and the low temperatures in the second zone both contribute to a reduction in NOx production. Staged combustion can result in NOx reductions of up to 60% for natural gas.

Due to the staging effect of staged combustion air (SCA) burners, flame lengths tend to be longer than those of conventional burners. This may be of particular concern for packaged units because there is the possibility that flame impingement will occur on the furnace walls, resulting in tube failure and corrosion. Additionally, staged air burners are often wider and longer than conventional burners, possibly requiring modifications to existing waterwalls and windboxes.

Staged combustion can be accomplished external to the burner body by separate introduction of air. External air staging techniques commonly used for larger boilers include:

In staged fuel burners, combustion air is introduced without separation and instead the fuel is divided into primary and secondary streams. Despite the high oxygen concentration in the primary combustion zone, thermal NOx formation is limited by low peak flame temperatures which result from the fuel-lean combustion. Quenching of the flame by the high excess air levels also occurs, further limiting the peak flame temperatures and providing active reducing agents for NOx reduction. Inerts from the primary zone then reduce peak flame temperatures and localized oxygen concentration in the secondary combustion zone, thereby reducing NOx formation. An advantage of staged fuel burners over staged air burners is that they tend to have shorter flame lengths, decreasing the likelihood of flame impingement.
The following sections summarize the performance, applicability, and availability of the various methods of implementing SCA on the major types of natural-gas or oil-fired boilers.

SCA is not considered a primary NOx control method for existing firetube boilers because of the major modifications required to retrofit staged air to these boilers. Side-fired air application is difficult as retrofit requires penetration of the firetube boiler water shell.

Packaged watertube boilers generally use only one burner, so BOOS is not applicable as a means of achieving staged combustion. As with firetube boilers, retrofit of SCA to smaller packaged watertube units is often impractical due to the difficulty of retrofitting equipment.

For field-erected watertube boilers equipped with more than one burner, staged combustion can be achieved by using OFA, BOOS, or biased burner firing. Biased burner firing consists of firing certain burners fuel-rich while other burners are fired fuel-lean. This may be accomplished by maintaining normal air distribution to the burners while adjusting fuel flow so that more fuel is sent to desired burners. Usually, the upper row of burners is fired fuel-lean, but this varies from boiler to boiler.

Although operation with BOOS can measurably reduce NOx, the operating performance of the boiler can be somewhat degraded because of the need to increase excess air in order to control CO, hydrocarbon, and smoke emissions. Adjustments to the airflow controls, such as burner registers, may be required to achieve the desired burner stoichiometry without increasing these emissions. Also, operation with BOOS usually requires that the unit be derated unless modification to the fuel delivery system is made.

Generally, OFA is applicable only to large furnaces with sufficient volume above the burners to allow complete combustion and steam temperature control.
Combined Combustion Modifications

Many retrofits have utilized combinations of the above combustion modification methods. The combination of LNB with FGR is used by many vendors.
Other Low NOx Burners

An LNB type known as a cyclonic burner has been developed by AESYS/York-Shipley for packaged boilers. In cyclonic combustion, high tangential velocities are used in the burner to create a swirling flame pattern in the furnace. This causes intense internal mixing as well as recirculation of combustion gases, diluting the temperature of the near-stoichiometric flame and lowering thermal NOx formation. The tangential flame causes close contact between combustion gases and the furnace wall, adding a convective component to the radiant heat transfer within the furnace. The increased heat transfer and low excess air operation of the cyclonic burner result in increased boiler efficiency. To achieve ultra-low NOx levels, a small quantity of low-pressure steam is injected into the burner, which further reduces the local flame temperature and NOx formation. 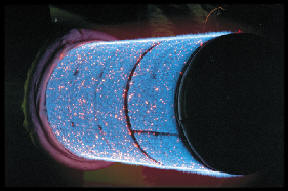 Alzeta Corporation has developed a patented fully pre-mixed surface stabilized combustion technology to achieve single digit NOx emissions. The technology has been used in firetube, watertube and process heater applications. In the burner, fuel gas is premixed with combustion air before entering the burner. The surface material is cooled by the incoming air/fuel mixture and the low combustion temperature limits thermal NOx formation. 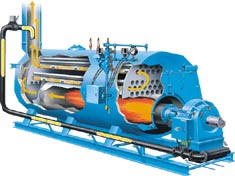 FGR involves recycling a portion of the combustion gases from the stack to the boiler windbox. Introducing some of the flue gas back into the combustion air can reduce peak flame temperatures. The incoming air is diluted and the oxygen concentration in the combustion zone is reduced. During combustion, the recirculated flue gases also absorb some of the heat and thereby reduce the peak combustion temperatures. In order to retrofit a boiler with FGR, the major additional equipment needed are a gas recirculation fan, dampers and ducting.

The figure shows a typical installation.

Increased FGR can increase the flame size which may cause impingement on heat transfer surfaces thus limiting firing rate. The energy efficiency may be negatively impacted due to reduced heat transfer as a result of lower flame temperatures. Usually, boiler thermal efficiency reductions resulting from FGR are limited to around 1% or lower.

For a given firing rate, FGR increases the throughput of gases in the burner and firebox. The higher gas flow may require a larger forced draft fan or an additional flue gas recirculation fan.

FGR has little effect on fuel bound NOx emissions. FGR is used on a number of watertube and firetube boilers firing natural gas. Boilers are usually not operated with more than 20 percent FGR due to flame stability considerations. Overall NOx reductions are typically in the 40 – 70% range. In general, thermal NOx reductions from distillate-oil-fired boilers with FGR are somewhat less than from natural-gas-fired units. This is due to the greater potential for flame instability and emissions of unburned combustibles from distillate-oil-fired units, which limits the practical rate of FGR that can be used.

Fuels containing sulphur can create sulphur oxides in the flue gas. In addition, soot can buildup on the fan and burner passages. Therefore, FGR is typically not used when burning heavy fuel oils.

Fuel induced recirculation is a control technology for natural-gas-fired boilers. FIR involves the recirculation of a portion of the boiler flue gas and mixing it with the gas fuel at some point upstream of the burner.

The primary difference between FIR and FGR is that in FIR the flue gas is mixed with the fuel stream, whereas in FGR the flue gas is recirculated into the combustion air. By diluting the fuel prior to combustion, which lowers the volatility of the fuel mixture, FIR reduces the concentration of hydrocarbon radicals that produce prompt NO. Additionally, FIR reduces thermal NOx in the same manner as FGR, by acting as a thermal diluent. Thus, one of the main benefits of FIR technology is that it impacts both prompt NO and thermal NOx formation in gas-fired boilers.

When water or steam are injected in the flame, they reduce the peak flame temperature and the oxygen concentration. The quenching of the flame reduces the NOx by as much as 75 percent, depending on the amount of water or steam injected. Less water than steam is needed to achieve the same quenching effect because of the heat of vaporization required to change water into steam. Water/Steam can also be directly injected into the combustion air just prior to the flame.

Because of low initial cost, the technique is considered particularly effective for small single-burner packaged boilers operated infrequently. In these applications, the oil gun positioned in the center of the natural gas ring burner is used to inject the water at high pressure. The amount of water injected normally varies between 25 and 75 percent of the natural gas feedrate, on a mass basis. However, the technique has some important environmental and energy impacts. For example, CO emissions may increase because of the quenching effect on combustion, and the thermal efficiency of the boiler decreases because the moisture content of the flue gas increases, contributing to greater thermal losses at the stack. Another concern related to the technique is its potential for unsafe combustion conditions that can result from poor feedrate control.

One vendor of steam injection technology offers an advanced design based on “hypermixing”. In this concept, the injected steam acts as more than just a heat sink. By injecting high pressure steam directly at the burner head instead of simply adding it into the air or fuel steam, steam injection can become a significant source of mixing power and it becomes possible to increase the mixing rates with the products of combustion in the furnace. The mixing power boost provided by the high velocity steam greatly improves the temperature uniformity within the furnace reducing peak temperatures which results in lower NOx formation. The improved mixing uniformity can also reduce excess air requirements.