The process of clarification generally involves the addition of coagulation chemicals to a water supply, mixing under heavy agitation to cause the particles to cling together and grow larger, and mechanically removing them from the water.

Clarification is commonly used in  combination with filtration for total removal of solids.

Coagulation, the first step in complete clarification, is the neutralization of the electrostatic charges on colloidal particles. Because most of the smaller suspended solids in surface waters carry a negative electrostatic charge, the natural repulsion of these similar charges causes the particles to remain dispersed almost indefinitely. To allow these small suspended solids to agglomerate, the negative electrostatic charges must be neutralized. This is accomplished by using inorganic coagulants (water soluble inorganic compounds), organic cationic polymers or polyelectrolytes.

The most common inorganic coagulants are:

Organic coagulants serve the same function as the inorganic metal salts, but the process is simpler because the charge neutralization reaction is the only concern. Polymer addition has no effect on pH or alkalinity, so no supplemental chemical feed is required to control either.

Polymers can be envisioned as long chains with molecular weights of 1000 or less to 5,000,000 or more. Along the chain are numerous charged sites. In primary coagulants, these sites are positively charged. The sites are available for adsorption onto the negatively charged particles in the water. To accomplish optimum polymer dispersion and polymer/particle contact, initial mixing intensity is critical. The mixing must be rapid and thorough. Polymers used for charge neutralization cannot be over-diluted or over-mixed. The farther upstream in the system these polymers can be added, the better their performance.

Because most polymers are viscous, they must be properly diluted before they are added to the influent water. Special mixers such as static mixers, mixing tees and specially designed chemical dilution and feed systems are all aids in polymer dilution.

Flocculation – The Second Step of the Coagulation Process

Once the negative charges of the suspended solids are neutralized, flocculation begins. Charge reduction increases the occurrence of particle-particle collisions, promoting particle agglomeration. Portions of the polymer molecules not absorbed protrude for some distance into the solution and are available to react with adjacent particles, promoting flocculation. Bridging of neutralized particles can also occur when two or more turbidity particles with a polymer chain attached come together. It is important to remember that during this step, when particles are colliding and forming larger aggregates, mixing energy should be great enough to cause particle collisions but not so great as to break up these aggregates as they are formed.

Color in surface water normally is a result of its contact with decayed vegetation and is composed of tannins and lignins, the components that hold together the cellulose cells in vegetation. In addition to their undesirable appearance in drinking water, these organics can cause serious problems in downstream water purification processes. For example:

There are many ways of optimizing color removal in a clarifier:

The simplest form of clarification uses a large tank or horizontal basin for sedimentation of flocculated solids. The basin may contain separate chambers for rapid mix, slow mix and settling. The first two steps are important for good clarification. An initial period of turbulent mixing is necessary for contact between the coagulant and the suspended matter, followed by a period of gentle stirring to increase collisions between particles and increase floc size. Typical retention times are 3-5 minutes for rapid mix, 15 to 30 minutes for flocculation. and 4-6 hours for settling.

The coagulant is added to the waste water in the rapid mix chamber or just upstream, and the water passes through the mix chambers into the settling basin. As the water passes along the length of the basin (or out to the circumference in the case of a circular clarifier), the flocculated particles settle to the bottom and are scraped into a sludge collection basin for removal and disposal. Clear water flows over a weir and is usually held in a tank called a clearwell. 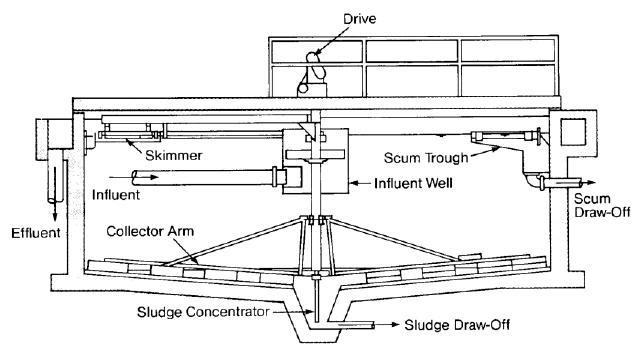