Mechanical and chemical deaeration is an integral part of modern boiler water protection and control. Deaeration, coupled with other aspects of external treatment, provides the best and highest quality feed water for boiler use.

Simply speaking, the purposes of deaeration are:

Deaerators are typically elevated in boiler rooms to help create head pressure on pumps located lower. This allows hotter water to be pumped without vapor locking should some steam get into the pump.

The most common source of corrosion in boiler systems is dissolved gas: oxygen, carbon dioxide and ammonia. Of these, oxygen is the most aggressive. The importance of eliminating oxygen as a source of pitting and iron deposition cannot be over-emphasized. Even small concentrations of this gas can cause serious corrosion problems.

Makeup water introduces appreciable amounts of oxygen into the system. Oxygen can also enter the feed water system from the condensate return system. Possible return line sources are direct air-leakage on the suction side of pumps, systems under vacuum, the breathing action of closed condensate receiving tanks, open condensate receiving tanks and leakage of non-deaerated water used for condensate pump seal and/or quench water. With all of these sources, good housekeeping is an essential part of the preventive program.

One of the most serious aspects of oxygen corrosion is that it occurs as pitting. This type of corrosion can produce failures even though only a relatively small amount of metal has been lost and the overall corrosion rate is relatively low. The degree of oxygen attack depends on the concentration of dissolved oxygen, the pH and the temperature of the water.

Mechanical deaeration is the first step in eliminating oxygen and other corrosive gases from the feed water. Free carbon dioxide is also removed by deaeration, while combined carbon dioxide is released with the steam in the boiler and subsequently dissolves in the condensate. This can cause additional corrosion problems.

Because dissolved oxygen is a constant threat to boiler tube integrity, this discussion on the deaerator will be aimed at reducing the oxygen content of the feed water. The two major types of deaerators are the tray type and the spray type. In both cases, the major portion of gas removal is accomplished by spraying cold makeup water into a steam environment.

Tray-type deaerating heaters release dissolved gases in the incoming water by reducing it to a fine spray as it cascades over several rows of trays. The steam that makes intimate contact with the water droplets then scrubs the dissolved gases by its counter-current flow. The steam heats the water to within 3-5 º F of the steam saturation temperature and it should remove all but the very last traces of oxygen. The deaerated water then falls to the storage space below, where a steam blanket protects it from recontamination. 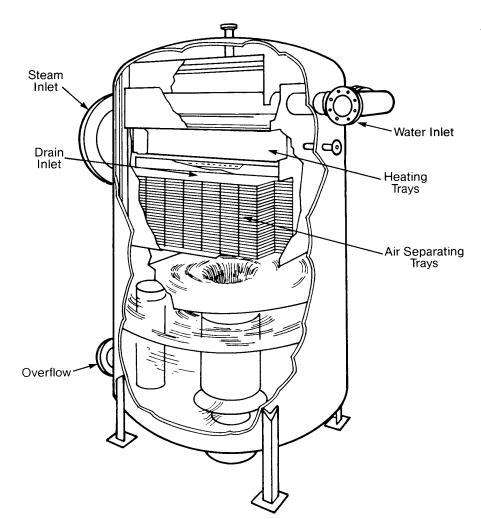 Spray-type deaerating heaters work on the same general philosophy as the tray-type, but differ in their operation. Spring-loaded nozzles located in the top of the unit spray the water into a steam atmosphere that heats it. Simply stated, the steam heats the water, and at the elevated temperature the solubility of oxygen is extremely low and most of the dissolved gases are removed from the system by venting. The spray will reduce the dissolved oxygen content to 20-50 ppb, while the scrubber or trays further reduce the oxygen content to approximately 7 ppb or less.

During normal operation, the vent valve must be open to maintain a continuous plume of vented vapors and steam at least 18 inches long. If this valve is throttled too much, air and nonconclensable gases will accumulate in the deaerator. This is known as air blanketing and can be remedied by increasing the vent rate.

For optimum oxygen removal, the water in the storage section must be heated to within 5 º F of the temperature of the steam at saturation conditions. From inlet to outlet, the water is deaerated in less than 10 seconds.

The storage section is usually designed to hold enough water for 10 minutes of boiler operation at full load. 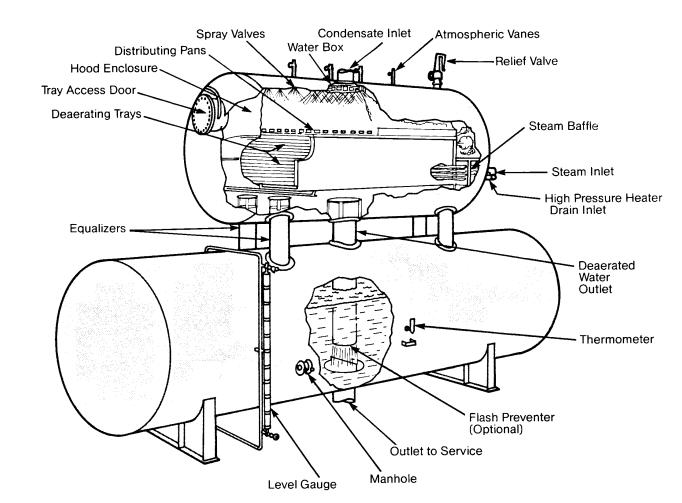 Inlet water should be virtually free of suspended solids that could clog spray valves and ports of the inlet distributor and the deaerator trays. In addition, spray valves, ports and deaerator trays may become plugged with scale that forms when the water being deaerated has high hardness and alkalinity levels. In this case, routine cleaning and inspection of the deaerator is very important.

Where economizers are installed, good deaerating heater operation is essential. Because oxygen pitting is the most common cause of economizer tube failure, this vital part of the boiler must be protected with an oxygen scavenger, usually catalyzed sodium sulfite. In order to insure complete corrosion protection of the economizer, it is common practice to maintain a sulfite residual of 5-10 ppm in the feed water and, if necessary, feed sufficient caustic soda or neutralizing amine to increase the feed water pH to between 8.0 and 9.0.

Below 900 psi excess sulfite (up to 200 ppm) in the boiler will not be harmful. To maintain blowdown rates, the conductivity can then be raised to compensate for the extra solids due to the presence of the higher level of sulfite in the boiler water. This added consideration (in protecting the economizer) is aimed at preventing a pitting failure. Make the application of an oxygen scavenger, such as catalyzed sulfite, a standard recommendation in all of your boiler treatment programs.

For more on economizers.

Complete oxygen removal cannot be attained by mechanical deaeration alone. Equipment manufacturers state that a properly operated deaerating heater can mechanically reduce the dissolved oxygen concentrations in the feed water to 0.005 cc per liter (7 ppb) and 0 free carbon dioxide. Typically, plant oxygen levels vary from 3 to 50 ppb. Traces of dissolved oxygen remaining in the feed water can then be chemically removed with the oxygen scavenger.

Oxygen scavengers are added to the boiler water, preferably in the storage tank of the deaerator so the scavenger will have the maximum time to react with the residual oxygen. Under certain conditions, such as when boiler feedwater is used for attemperation to lower steam temperature, other locations are preferable. The most commonly used oxygen scavenger is sodium sulfite. It is inexpensive, very effective and rapidly reacts with the trace amounts of oxygen.

It is also easily measured in boiler water. In most cases it is the oxygen scavenger of choice. There are instances in some higher pressure boilers (generally above 900 psig), that some of the sulfite may decompose and enter the steam, causing problems in the condensate systems and condensing steam turbines. In these cases, substitute (usually organic-based) oxygen scavengers can be used.

New oxygen scavengers have been introduced in recent years. The decision to use them or rely on sodium sulfite should only be made by those qualified to make boiler water treatment decisions. In all cases the new product should be carefully added and its effectiveness evaluated in accordance with operating procedures.

Basically there are two general techniques for measuring Dissolved Oxygen (DO). Each employs an electrode system in which the dissolved oxygen reacts at the cathode producing a measurable electrochemical effect. The effect may be galvanic, polarographic or potentiometric.

One technique uses a Clark-type cell which is merely an electrode system separated from the sample stream by a semi-permeable membrane. This membrane permits the oxygen dissolved in the sample to pass through it to the electrode system while preventing liquids and ionic species from doing so. The cathode is a hydrogen electrode and carries a negative applied potential with respect to the anode. Electrolyte surrounds the electrode pair and is contained by the membrane. In the absence of a reactant, the cathode becomes polarized with hydrogen and resistance to current flow becomes infinite. When a reactant, such as oxygen that has passed through the membrane is present, the cathode is depolarized and electrons are consumed. The anode of the electrode pair must react with the product of the depolarization reaction with a corresponding release of electrons. As a result, the electrode pair permits current to flow in direct proportion to the amount of oxygen or reactant entering the system; hence, the magnitude of the current gives us a direct measure of the amount of oxygen entering the system.

The second basic measuring technique uses an electrode system that consists of a reference electrode and a thallium measuring electrode. No semi-permeable membrane is used; the electrode system is immersed directly into the sample. Oxygen concentration is determined by measuring the voltage potential developed, in relation to the reference electrode, when dissolved oxygen comes in contact with the thallium electrode. At the surface of the electrode the thallous-ion concentration is proportional to the dissolved oxygen. The voltage potential developed by the cell is dependent upon the thallous-ion concentration in this layer and varies as the dissolved oxygen concentration changes. The cell output rises 59 millivolts for each decade rise in oxygen concentration. This technique uses a potentiometric system. The method measures directly the concentration of oxygen in the sample. As in the first technique, temperature compensation is a must and is achieved in about the same way. In both techniques, interfacial dynamics at the probe-sample interface are a factor in the probe response. A significant amount of interfacial turbulence is necessary and for precision performance, turbulence should be constant.