Heating combustion air can raise boiler efficiency about 1% for every 40F in temperature increase. The most common way to preheat the air is with a heat exchanger on the flue exhaust. The heat exchanger can be either air-to-air or air-to-liquid-to-air.

Combustion air pre-heater technology on large coal-fired boilers dates back to the early 1900’s, and is used on most all large boilers todays. With the increasing price of fuel and technology improvements, the size of a boiler that can be economically equipped with a pre-heater should become smaller. Although still a technology most applicable to large boilers, high energy prices will certainly motivate innovative new applications for economical combustion air pre-heaters on ever smaller boilers. 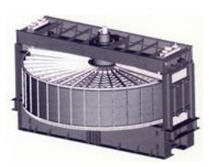 The basic component of the Ljungström® air preheater is a continuously rotating cylinder, called the rotor, which is packed with thousands of square feet of specially formed sheets of heat transfer surface which are commonly called elements.

The rotor is enclosed by housing panels connected to the main pedestals to form the preheater casing, with the drive unit, cleaning device mechanism, and sealing surface adjusters all located externally to be readily accessible while the unit is in operation.  Upper and lower connecting plates are attached to the preheater casing to form a transition from the preheater rotor and casing shape to the clients ductwork connections. 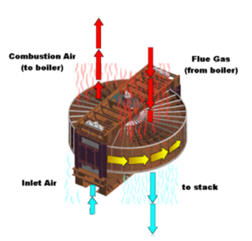 The advanced sealing system of the Ljungström® air preheater is a result of an evolution of devices and methods to develop a sealing system that is capable of successfully controlling and minimizing air-to-gas leakage. The design takes advantage of normal thermal growths to achieve effective sealing with a minimum of maintenance requirements. The integrated sealing system comprises of proximity seals and stationary sealing surfaces arranged to inhibit leakage from the air side of the air preheater to the gas side.

From Bob Dubil as posted on the Carmagen Engineering web site:

This is the Ljungstrom type, which has a slow-turning rotor that is packed with closely spaced heat transfer surfaces, similar to an automobile radiator. The rotor turns in the gas streams, picking up heat from the flue gas and transferring it to the combustion air. The element temperatures generally operate about halfway between the flue gas and air temperatures.

The advantages of the rotary regenerative air preheater are:

Disadvantages of the rotary regenerative air preheater are:

These are generally called static air preheaters. Their designs vary from a plate-frame type to a cast-iron “tubular” type.

The bottom line is that both types of air preheater have offsetting advantages and disadvantages. There have been little design changes in recent years, which have increased air preheater efficiency. However, most efforts seemed aimed at reducing manufacturing costs. It seems that most recent installations have been fixed-recuperative type, rather than rotary-regenerative type. I believe that this is due to lower first-cost and a willingness to operate the air preheater to failure, rather than spend more initially, and perform the continued maintenance necessary to maximize unit life. 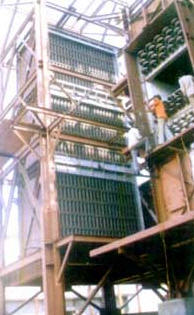 From the KEC Industries web site:

Many fired heaters working in the industry today are more than 20 years old with thermal efficiency of 75-80%. The industry norms have changed over the years and thermal efficiencies of 90-92% are expected and in some cases as high as 94% efficiency have been achieved. Air Preheaters (Cast & Glass type are designed manufactured and supplied by KEC) result in 1% increase in efficiency for every 20 °C drop in Flue Gas temperature.

Typically Flue Gases leaves the convection section of the heater at around 400 °C, and a cast type Air Preheater brings down its temperature to around 200 °C thus resulting in 10% increase in efficiency. The Flue Gas temperature can further be brought down to around 160 °C or less in a Glass Air Preheater thus resulting in a further efficiency improvement of 2% or more.

Cast Tube Air Preheater is an assembly of rectangular cast tubes with integral fins on  both internal and external surfaces. The tubes are assembled inside a structural frame. To ensure that no leakage of air takes place, gaskets are provided on all mating parts. All tube sealing surfaces are machined to provide leak tight gasket joints. The equipment is fully shop assembled in modules and tested for leak tightness before being dispatched to project site. A modular construction is used to reduce erection time at site. 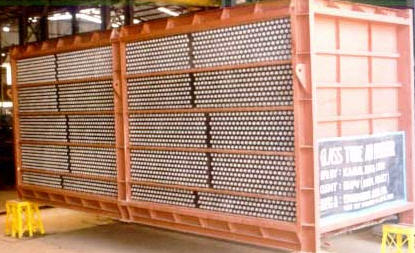 The Glass Air Preheater is made of borosilicate glass tubes inserted into tube sheets of carbon steel lined with Teflon. The other sides are clad with SS904L sheets. Tube to tube sheet joints are provided with special bush / glands to minimize leakage. Glass Air Preheaters recover additional heat at lower temperature and at the same time take care of cold end corrosion. The equipments are fully shop assembled in modules and tested for leak tightness before being dispatched to project site.

Text and photos from the KEC Industries web site at http://kecindustries.com/airpreheater.htm 4/2005.

Source: Text compiled by Bob Fegan based on sources referenced and linked above 4/2005;