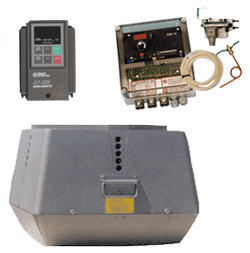 Boilers must maintain a proper flue draft for efficient combustion; too little draft can result in condensation, CO formation, flue gas spillage, and soot formation. Too much draft results in lost thermal energy from the boiler and higher electrical usage by the vent fan.

Gravity / barometric pressure systems must be over-sized in order to function in the worst conditions. This leads to wasted energy and higher installation costs. Fixed speed power vent systems also waste energy by not being able to adjust to actual conditions.

From the Exhausto web site:

The rudimentary mechanical draft assist is a single speed fan that delivers a pre-set volume of air and utilizes a barometric damper for relief should the mechanical draft become too strong. Their design makes them rather inefficient and limits their application to certain types of chimney designs.

Today’s constant pressure chimney automation systems have the ability to control, monitor and maintain pre-set draft requirements by varying the flow. By controlling the draft completely, we can reduce the need for combustion air and can apply the system to virtually any stack design.

EXHAUSTO’s Chimney Automation System (CASV) is for installation and use with multiple and/or modulating boilers and water heaters. It can be used in conjunction with almost any type of appliance and fuel, whether it is forced draft, atmospheric or condensing design.

The Chimney Automation System maintains a perfect, constant draft for the appliances by modulating the chimney fan capacity. The system is activated when there is a call for heat. It will create and maintain a pre-set draft prior to or immediately after the appliance fires.

The system monitors the draft condition at any time and has an integrated safety function. Should the draft fall more than 40% below the set point for more than 12 seconds, it will deactivate the appliances to prevent a potentially hazardous situation.

Advantages to using a chimney automation system are as follows:

The following burner operating difficulties can result from uncontrolled draft:

Go to their web site at http://us.exhausto.com 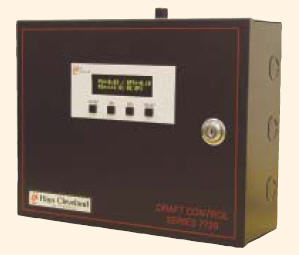 Go to their web site atwww.hayscleveland.com