According to DOE, in steam systems that have not been maintained for three to five years, between 15% to 30% of the installed steam traps may have failed—thus allowing live steam to escape into the condensate return system. In systems with a regularly scheduled maintenance program, leaking traps should account for less than 5% of the trap population. If a steam distribution system includes more than 500 traps, a steam trap survey will probably reveal significant steam losses.

Before testing a steam trap, inspectors should be familiar with the particular function, review typical types of traps and know the various pressures within the system. This can help avoid misdiagnosis and allow proper interpretation of trap conditions.

There are three main categories of online trap inspection: visual,thermal and acoustic.

Visual inspection depends on a release valve situated downstream of certain traps. An inspector opens these valves and looks to see if the trap is discharging condensate or steam. Thermal inspection relies on upstream/downstream temperature variations in a trap. It includes pyrometry, infrared, heat bands (wrapped around a trap, they change color as temperature increases), and heat sticks (which melt at various temperatures). Acoustic techniques require an inspector to listen to and detect steam trap operations and malfunction. This method included various forms of listening devices such as doctors’ stethoscopes, screwdrivers, mechanical stethoscopes and ultrasonic detection instruments.

The ideal listening device will allow users to listen to the sounds of steam trap operations while ignoring most ambient pipe sounds. This is where ultrasonic listening devices excel. Since they are sensitive to high frequency (short wave) signals, they tend to ignore most stray pipe signals. Also, they are very directional in their pick-up. For this reason, they will allow users to hear and see on meters the exact operations of steam traps.

Ultrasonic detectors usually have a stethoscope module, which contains an ultrasonic transducer attached to a metal rod that acts as a “wave guide”. The wave guide is touched on the downstream side of a trap to determine trap condition such as mechanical movements or steam and condensate flow. Most ultrasonic detectors amplify the signals and translate them into the audible range where they are heard through headphones or seen as intensity increments on a meter. Some include frequency tuning to allow users to tune into desired trap sounds. 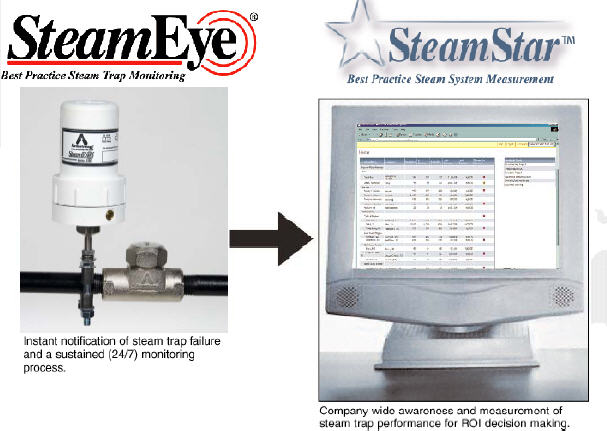 SteamEye® uses a radio frequency (RF) wireless transmitter mounted at the inlet of any type of steam trap to detect temperature and ultrasonic fluctuations in steam flow. A central receiver then alerts system operators of trap failure.

SteamEye technology is constantly on – constantly reporting the status of your steam traps for optimum energy system management and savings. It can be installed on traps in service without shutting off the steam, and its remote, wireless operation addresses the labor costs and safety issues associated with manual monitoring.

If manual trap surveys are more feasible in certain areas, use SteamStar as a stand-alone application. Either way validates the cost.

SteamStar is the only Web-based application that can demonstrate savings while showcasing energy reduction efforts to multiple organizational levels. It lets an organization evaluate energy savings locally, as well as at sites around the world. The data is safe, secure and accessible – any place, anytime, anywhere.

Go to their web site at www.armstronginternational.com